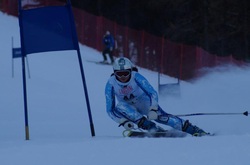 I am a current member of the Australian National Junior Team and the NSW/ACT Ski Team. This past European season training with Steve was a huge progression for me, and allowed me to really feel comfortable in my abilities again after taking two seasons off. Steve is one of the most motivational coaches I have ever had the pleasure of training with, always having a positive attitude towards training and in general life, and this consequently rubs off on his athletes as well. He is the type of coach that can explain difficult technical aspects of skiing in a way that athletes can easily understand. I can accredit all my recent improvements in Europe to the awesome training that was provided over there, and truly believe that Steve is the coach that can help me reach my full potential in ski racing.
"Toni Hodkinson" 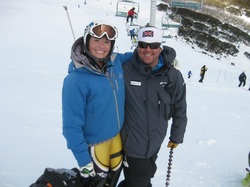 Stephen is a great coach, having been a former racer himself he brings a lot of knowledge and motivation to your skiing. He makes travelling with, very easy and entertaining. Also helpfully that he speaks 3 languages. In my last few years of racing I learnt a great deal from him and became a better technical skier. Even when I was down on myself, Stephen always had the right thing to say and you could never wipe that cheeky grin off his face.

Stephen has been my coach for two years (four seasons) now and I have gone from a beginner to a confident skier in technique, racing experience, knowledge and even powder skiing.

I was glad to be given the opportunity to go to Europe and train in both Italy and France, thanks to Stephen Edwards I was lucky enough to train overseas with twice! The program was amazing my skiing improved enormously and I would highly recommend it to anybody interested. 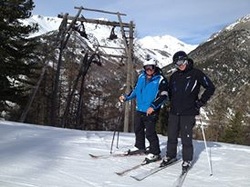 My son 17 year old son Greg has spent  a total of 11 weeks at Stephen’s training camp in Europe over the past two years.  He came to skiing relatively late in life for a young skier and there is no question at all that his exposure to Stephen’s coaching techniques both in Europe, and also at Perisher, have resulted in an extraordinary acceleration in both his general skiing ability, and more importantly, his performance in the racing arena.   The facilities on the mountain are second to none, the accomodation is excellent and the environment that Stephen and his team create both on and off the mountain inevitably results in the young athletes maturing markedly both as skiers and as individuals.   The programme is intense, and the kids work really hard for 6 out of the 7 days each week, but it is carefully tailored to suit their individual needs and goals.   In addition to the training they also have the opportunity to race in championships right across Europe, all of which has a significant impact on their racing skills and confidence.

It is also a great place for parents an siblings.   Apart from some of the best skiing terrain and weather in the world (an average of 300 days of sunshine a year, even if it does happen to get down to minus 25  on some blue bird days) and with a huge variety of runs that suit all levels of skiing ability (start the morning in France, ski across to Italy for coffee and then back to France for lunch), it is also a great place to use as a base to explore the rest of Europe.   With home being Oulx, which is on the TGV line between Paris and Milan, it means shopping and tourist trips of about 2.5 hours to Milan, 5 hours to Paris and 6 hours to Rome, no problem at all with a EuRail pass.

I cannot recommend Stephens’s EDEP programme here strongly enough to do it the justice it deserves, so please feel free to contact me directly should you have specific queries or questions. 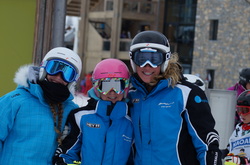 My experiences while I was in Europe training with Stephen Edwards were awesome. I improved a huge amount with him as a coach. He is great on and off the mountain. He's the best coach and I can't wait to go back to Europe to train with him.